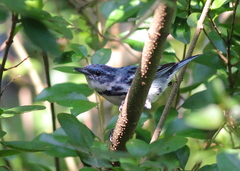 Because of its strategic streamside location with a mix of open meadows, pines, and hardwood forests, it is an excellent location for migrating species such as thrushes, vireos, warblers, tanagers, and flycatchers. Great-horned and barred owls are seen regularly and red-shouldered hawks nest here each spring.

Great blue herons, belted kingfishers, and wood ducks are seen along the banks of South Chickamauga Creek year round, and common loons are occasionally seen during migration. The area is also home to a large population of wild turkey and a colony of chimney swifts nest in the visitor center chimney each summer. Eastern bluebirds, brown-headed nuthatches, and numerous species of woodpeckers are seen daily, while house wrens, northern parulas, and indigo buntings can be found during the summer months.

Submit your data to: http://ebird.org/ebird/submit/effort?locID=L1259452

Other Wildlife
Red & Gray Foxes, Coyotes, and Bobcats are seen from time to time, while Raccoons, Opossum, Muskrats, Beavers, Groundhogs, Rabbits, Chipmunks and Squirrels can be seen most anytime. In 2020, a River Otter was seen playing in the creek! In the warm months, butterflies and sometimes dragonflies can be abundant.
​
Back To Audubon Acres Main