Photo by James Robert Hamilton, Jr. Courtesy of Juanita Hamilton Smith
Robert Sparks Walker was a Tennessean whose love of his native land inspired him to spend a lifetime in research and writing about its history and natural wonders.  For eighty-two years he lived in the Chattanooga area, finding there an endless wellspring of material on which he based his long and respected career.

Although he had obtained a law degree from Grant University, now the University of Tennessee at Chattanooga, he chose to become the editor and publisher of the Southern Fruit Grower paper in 1902.  He maintained this position for over twenty years, simultaneously writing freelance for many other publications.

After his first book of poetry and short stories was published in 1927, he turned his attention to Tennessee history.  His devotion to detail and accuracy in recording the development of the Brainerd Mission near Chattanooga has made Torchlights [to the Cherokee] as much in demand today as when it was first published in 1931. 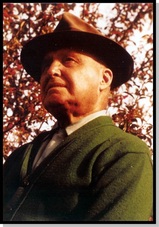 During the peak of his success in the 1940's and 1950's, both as a writer and noted Southern naturalist and personality, Walker wrote weekly newspaper columns and hosted local radio and television shows.  He was highly acclaimed as an authority on botany and ornithology, as well as local history, all of his knowledge having been gained through independent study.  In 1954, he was selected for the Kiwanis' "Man of the Year" award, in recognition of his service to the community and long-standing work with youth and scouting.

In his later years, he succeeded in helping to found a local chapter of the Audubon Society, and in 1948, the old Walker farm became a Wildlife Sanctuary.  Now known as Audubon Acres, it is open to the public, offering nature trails and a [restoration] of the original cabin.

Robert Sparks Walker died in 1960, and is buried where he wished to be, at the place of his origins in the land he loved better than any on earth, his beloved Tennessee boyhood home on the Chickamauga.

- Andra Walker Moskowitz (granddaughter)
from Torchlights to the Cherokee